I am against Cruelty to Animals !!

I am sorry but I sincerely refuse to receive or give wishes on the Festival of brutal sacrifice of innocent Animals. They say they raise a Goat/Camel/Ox/ etc. so that they develop Love for it and then they sacrifice their Loved one in the name of the "Most Merciful Allah". But I wonder why not at least try sacrificing their own beloved Son or Daughter like Prophet Abraham did? Why to buy a Goat for nurturing pseudo love? I always remained confused that "Why anybody would ever like to sacrifice one's loved one to eat and to distribute among friends?" and Why the most merciful God the Allah would ever ask to sacrifice of his own creations? How come Merciful Allah can be associated with "Bloody Sacrifice" of "Innocent and Speechless" animals? 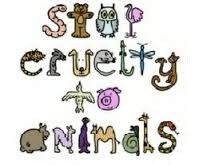 Process of Halaal described as painless comfortable death to Animals as Hallal according to the Holy Book cuts the nerve first that gives signals of pain to the brain. How conveniently we Human-beings assume on behalf of innocent dumb animals ignoring their teary eyes, fearful expressions and scary screams just before their brutal sacrifice following orthodox centuries old foolish practices to satiate our dumb conditioning.
Same cult would be on Roads holding Banners of cruelty against Humanity if Criminals following Islam in India would be given Death sentence for their convicted crime by inflicting Halaal. Then same Halaal which is considered painless for animals would be considered Brutal Indian Law for a particular community. Their would be Slogans of Intolerant and Biased India. Their would be signature campaigns against it. High time we must accept that we are biased and selective for showing sensitivity either its Human beings or innocent animals.
We must strongly consider that all the Religions are subjected to reforms not only Hinduism. Centuries old written texts must not stop us from questioning irrational and insensitive practices. We deserve a young generation that nurtures evolutionary thoughts, questioning mind and progressive brains.
Sacrifice Cruelty but definitely not the Innocent Animals!
~ Archana
13-09-2016
#ArchanaWrites #ReflectionsOfSoul #StopCrueltyToAnimals#ReformReligions #BeSensitive #BeHuman #IamAgainstCrueltyToAnimals
Posted by Archana at 11:44 AM